The following is a translation of an article that appeared at a Spanish-speaking website. It presents some interesting information. After this, the link to the original article and pictures are shown of the four people it references.
The Jewish ritual murders of Nuremberg are indescribable, judging by these photographs, in which all the corpses of the "hanged people" show a cut in the neck, right underneath the ear, and a thread of blood that falls behind the ear until the high part of the head .... The fact that the line of dried blood was flowing upwards - towards the forehead and the hair - demonstrates that they were hung [upside down] while they were bled and also explains the terrible condition of these corpses. From top to bottom, we see the bodies of Julius Streicher,Arthur Seyss-Iquart, Wilhem Keitel and Ernst Kaltenbrunner. Jews had to quickly show these corpses to the international press that covered the judgment. The Jewish executors had no time to prepare the bodies in order to properly hide the marks of the ritual sacrifice, especially in Keitel, who still shows his face covered in blood. (Or they felt it unnecessary to hide these marks.) No explanations have been given on this matter. Although we have selected only these four images, we must stress that ALL the executed ones had this. 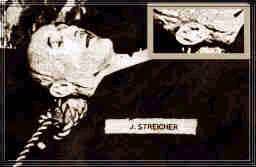 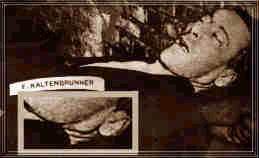